We can launch a new eco renaissance

The UN’s Scott Foster says deep retrofit of our building stock, and a sustainable built environment, should be at the heart of our recovery from the Covid-19 pandemic.

This article was originally published in issue 34 of Passive House Plus magazine. Want immediate access to all back issues and exclusive extra content? Click here to subscribe for as little as €10, or click here to receive the next issue free of charge

Scott Foster has a great green vision for our post Covid world. Over the past few years, Foster has made something of a name for himself as a global champion of passive and low energy buildings. Foster is director of the sustainable energy division at the United Nations Economic Commission for Europe (UNECE), which promotes economic co-operation between UN member states (UNECE includes the US, Canada, and the former soviet states, as well as Europe).

Passive House Plus first spoke with Foster in February about retrofit, the carbon footprint of building materials, and more besides. We intended to run the piece in our spring issue but decided to delay its publication until summer. Then the Covid-19 outbreak became a global pandemic, and suddenly our original interview felt dated.

So, in April we reached out to him again by email, to discuss how the global response to Covid-19 could be an ecological one. Foster pointed to anecdotes of how lockdowns had caused a dramatic reduction in pollution — “CNN reports that people in the northern Indian state of Punjab can now see the Himalayas, more than 100 miles away, because of reductions in air pollution,” he said — but he also stressed the pandemic had come at a devastating economic cost, and could lead to a dangerous deflationary cycle.

“Plummeting demand for products at some point will lead to drops in prices. As that effect becomes generalized, an economy will move into a deflationary, self-reinforcing spiral as people delay purchases in anticipation of lower prices. The money multiplier of economic growth becomes a money divider as economies shrink – deflation is considered to be much worse than inflation because of the deep damage it can do.”

He expressed hope that this effect would be temporary but added: “The implosion of the world’s economies is extraordinary, and as confinement continues the duration of deep repercussions becomes increasing unknowable. It is an urgent imperative to get the world’s economies back to work. Jobs, health, security, food, investments all depend on our getting back to work, though all the while ensuring that we do not relaunch the pandemic in the process.”

The agents of change are at the city and local level.

What is needed, he said, is a global economic “renaissance plan” with green principles, and deep retrofit of buildings, at its heart. The Renaissance, which marked the transition from the Middle Ages to modernity, was associated with “great social change and strides forward intellectually and culturally”, arguably just what we need now to confront the climate and ecological emergencies.

“If we simply re-launch economies by reverting to the model that existed before December 2019, then we are simply re-treading paths that take us to the wrong destination,” Foster said.

‘A holistic vision for the role of buildings’

While promoting energy efficiency in buildings is just one part of his job, it’s the one where Foster believes he can make the biggest difference. To underpin that belief, UNECE has developed ‘framework guidelines’ on energy efficiency in buildings, a set of common principles for UN nations to strive for. These advise limiting the space heating and cooling requirements in buildings to 25 kWh/m2 per year, and total energy use to 90 kWh/m2 annually.

But in general the guidelines are aspirational rather than prescriptive: they say that building design and construction should be sciencebased, and that building performance should be subject to ongoing measurement. Buildings should also be affordable, be built using sustainable materials, and integrated with their surrounding environments. They should also have advanced, networked building information systems (you can read the principles in full at unece.org/energyefficiency)

Speaking on the phone from Geneva in February, Foster said the guidelines “go way beyond what building standards do so far, in that they don’t deal with a house on a component by component basis, they deal with a building as an entire system, which is embedded in a community, which is its own system. Which is embedded in a city.” “This goes way beyond simply ‘passive house’. It creates a holistic vision of the role that buildings are going to play in a complex urban environment.” And he thinks these principles could be at heart of a post-Covid, or indeed intra-Covid, economic stimulus. Deep energy retrofit of buildings has been flagged as one of the effective ways to stimulate the economies post-Covid (for more see our feature on retrofit and stimulus elsewhere in this issue). Retrofit cuts carbon emissions, creates lots of jobs for every euro spent, and when done well, improves health and wellbeing for building occupants too. The challenge has always been how to make it happen at scale.

Cheaper finance for low energy renovations is part of the solution, Foster believes, as is direct government funding — which will hopefully receive a boost via Covid stimulus packages. Another key step is getting property valuations to reflect the quality of buildings in a more holistic sense — including, for example, whether they are good or bad on occupant health.

But we also need to change the way we pay for energy, he says. “If I move from paying for energy as a commodity to paying for energy as a service, instead of me sending you a bill for the number of kilowatt hours you’ve consumed, you and I enter into a subscription relationship, and you’re going to pay me to make sure the temperature in your house is 18C. You get the lighting you require, and air quality standards are met. My business model becomes one of looking at your entire dwelling as the complex system that it is and making needed investments to reduce my costs of delivering the energy services you require.”

This approach, called energy service contracting, works well in theory, though in practice it has been hindered by tricky contracting issues — such as the fact the consumers cannot easily change energy supplier under such arrangements. But Foster believes the concept is essentially sound. He says we need to see energy suppliers, rather than property owners or tenants, as the “agents of change” to scale up retrofit.

But we should also remember how important new build energy standards are going to be, especially in the global south. “If you think of a world with 9 billion people [as is predicted for 2050] and you imagine, as is expected, that 70% of those are going to live in cities … that is the equivalent of adding 235 new cities the size of Paris to the planet. So, when you look at the developing world, new building is extremely important to get right.” Cutting the embodied carbon of buildings is key too, and Fosters calls for methodical new ways of recovering materials from existing buildings to help avoid extraction of new raw materials in future. We should look at the built environment itself as a source of materials, he says.

“So if you’re going to demolish a building or trash a car, or whatever the object is, there needs to be some way to track all of the components that went into it, either its batteries or copper or steel… some mechanism for using digital processes for keeping inventories of what materials have gone into what objects, so when you go to dispose of it, you know what’s there, and you know how to access it.”

But he says that carbon taxes are a key underlying mechanism to make all of this happen. “I am not talking about €20, €30 or €50 per tonne of carbon, I’m talking north of €120. So, it’s a big number if you want to have a serious effect.” Without a carbon tax, the only choice is to try to regulate the climate impacts of each individual material or sector. “I’m not convinced of the effectiveness of prescriptive regulations in a market as complex and diverse as the global supply chain for buildings.”

In such a complex system, Foster says people working on the ground are most critical. To that end UNECE has developed its High Performance Buildings Initiative, partnering with New York, Pittsburgh, Vancouver, and Ireland to establish international centres of excellence in high performance building, to spread the good word at grassroots level among designers, tradespeople, and local decision makers.

These centres will provide training in low-energy design and construction, share best practice, and work to build public support for high performance buildings. In Ireland, the Waterford Wexford Education & Training Board has opened an NZEB (nearly zero energy building) training facility in Enniscorthy. It runs courses in low energy building skills for trades, including carpenters, bricklayers, electricians, plasterers, and plumbers.

“Wexford is a national initiative that is likely to have Ireland-wide effects, and we’re hoping to have Ireland then have an effect across the EU,” Foster says. “The agents of change are at the city and local level. Government policies are obviously very important — but I do find that it is critically important to talk to the people with the hammers in their hands, they’re the ones who are going to make things change.”

Fosters believes pumping in money and support at this level is crucial to any retrofit stimulus. “Getting cash into the hands of the tradespeople – the carpenters, the plumbers, the contractors, the architects, and the rest of the building supply chain — would reinvigorate local economies rapidly while delivering on long-term quality of life for everyone (climate, affordability, health, comfort),” he wrote to us. 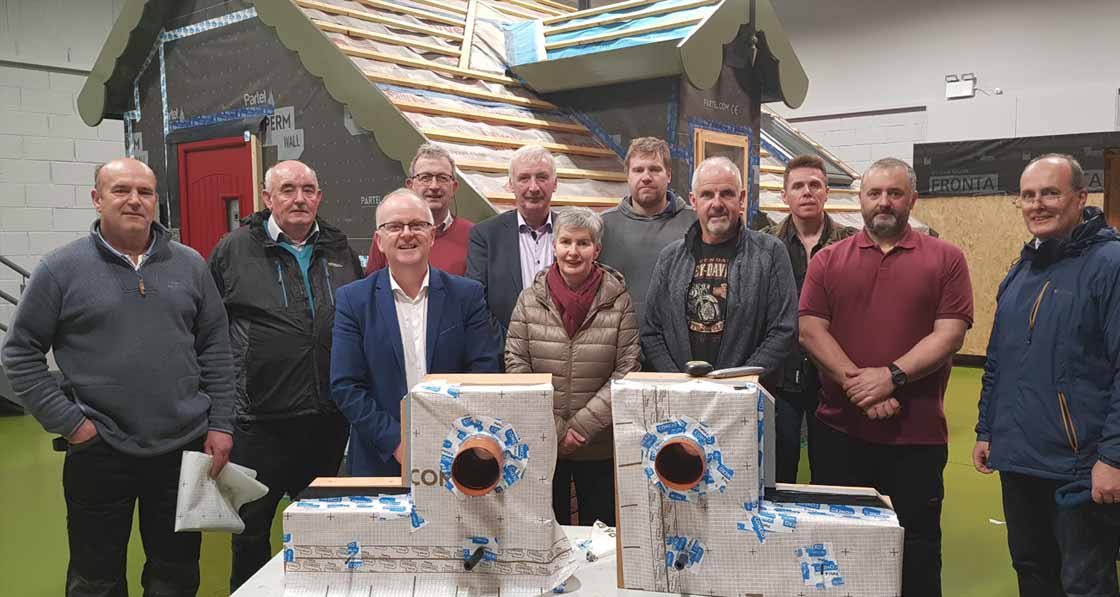 Participants at an NZEB training course run by Waterford Wexford Education & Training Board, one of the latest UNECE centres of excellence for high performance buildings.

Foster is unequivocal on the state of our planetary emergency. “The world is not on track for 1.5 degrees or 2 degrees [of warming]. Right now, we are barrelling down the highway for between 4 and 6 degrees and that is, as a species, the existential threat that we’re facing,” he says. “And by the way we’re screwing up life for a lot of other species in the process, too.”

Facing this crisis will require global cooperation, and a recognition of our inter-dependence. Foster believes this has been lacking in our response to Covid-19. “If governments had been open and transparent about the challenges they faced and collaborated on the solutions, the now pandemic could have been contained better by staying at the personal transmission level and not a community transmission level. Had they shared experiences on what was working and what was not, they might have flattened curves much earlier on,” he wrote to us in April. “So, yes, I firmly believe that nations and states acting alone do not work as well as collaboration based on science and facts. Mutually beneficial interdependence requires trust, and that seems to have gone missing.”

Trust, and co-operation will certainly need to be rebuilt, if Foster’s vision of a green global economic renaissance is to bear fruit. But his vision is still a vivid one. “We have an opportunity with this pandemic to catalyse a modern renaissance, a re-birth of nations and economies in a way that delivers quality of life sustainably at global scale.” 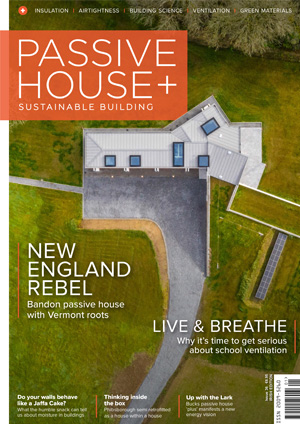